A False Start: “There is no magic money tree” 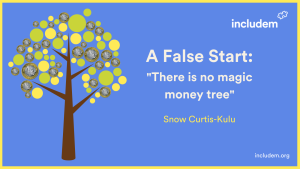 It appears we are set to enter a recession in tandem with sky rocketing inflation, and crisis fatigue setting in. It is in every decision-making room, whether we want to admit to it or not. I can’t tell you how many times I’ve heard the line “there is no magic money tree” in the last month. This shouldn’t be the basis of how we respond. Before we discount any further action, we need to start by understanding the challenges in front of us.

Yes, money is tight. As the cost of living soars, every household is facing this reality, some having faced this for some time now. Families already struggling to meet the costs of essentials are taking the brunt of the hit – with lone parents and larger families particularly badly impacted.

“…More than once I thought ‘I don’t actually have enough money to be alive.'” (Participant in the includem’s Local Elections Manifesto)

As we enter deeper into this crisis, we need to face the prevalence of poverty in the UK. According to the Joseph Rowantree Foundation (JRF), in May 2022:

Over half of those in poverty live in working households. The Child Poverty Action Group reports that for children, this rises to 75%.

Last week, the Guardian reported that an even higher rise in energy bills is forecasted by the Cornwall Insight – set to reach £3,582 a year for the average household in October, rising to £4,266 in January. For too many families, including those includem supports, skipping meals, foregoing broadband, and wrapping up in blankets to avoid heating costs is already a reality.

What is there left to cut?

“Worrying about money and food has such a negative effect on mental health. I know people who have committed suicide over it. At times I have felt like jumping out the window.” (Parent supported by includem)

The light at the end of the tunnel is dimming. According to the Bank of England, by Christmas we will enter a recession lasting longer than a year. The Office of Budgetary Responsibility predicts that we are facing the biggest fall in living standards on record.

Destitution will have long term costs to children’s health and wellbeing – and their parents and carers. As reported by the British Medical Association (2016), the effect of the 2008 financial crisis in the UK stagnated over several years – with rising unemployment (especially for young people), sharp decreases in incomes, increasing material deprivation, more evictions and homelessness, and a rise in parents being unable to afford the cost of the school day. This increases stress, anxiety and depression, let alone the association between early childhood low income and later adverse physical health outcomes. All of this impacts brain development and educational attainment.

The current crisis could have ripple effects across all our lives. Austerity measures and welfare reforms after the financial crash served to erode measures aimed to tackle child poverty and inequalities, and the slowness of the subsequent recovery in living standards was striking. Without an evidence-based response, the immediate and longer-term effects of the rising cost of living and looming recession could have untold consequences across our public health and social care systems. Which are already overwhelmed by existing demand due to previous cuts.

“It was by no means inevitable… that children would be the most enduring victims of the recession.” (UNICEF in the Innocenti Report Card– Children in the Developed World, 2014)

Poverty is a political, rather than personal choice. We urge decision makers to stop playing politics with people’s lives.

We need to enter this crisis from a place of solidarity and compassion to keep our futures safe. There may be “no magic money tree”, but we are in one of the richest countries in the world. To prevent unnecessary suffering and even more devastating long-term consequences… 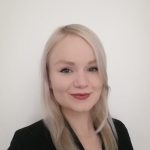